ONSSA present at the Strawberry Festival 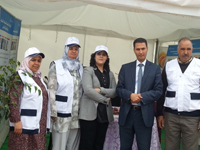 The Regional Direction of Rabat-Salé-Zemmour-Zaërs and Gharb Chrarda-Bni Hssen participated in the 4th edition of the Strawberry Festival in Moulay Bousselham, Kenitra, which was held from April 16 to April 20, 2014. Indeed, an ONSSA stand has been set up, equipped with communication tools (institutional film, panels) presenting the mission and activities of the office and providing visitors with leaflets and brochures.
During the inaugural ceremony, the ONSSA Stand was visited by a delegation chaired by the President of the Gharb Chrarda Beni Hssen region and made up of ambassadors from different countries, including Belgium, Palestine, Peru, Indonesia. , Malaysia, Sudan, Venezuela, Brunei…, elected officials, local authorities and professionals, a presentation was given on the missions of ONSSA, its various activities and its field of intervention as a competent authority. responsible for the sanitary control of food products.
A souvenir trophy of this fair was awarded to ONSSA for the efforts made in the red fruit sector, flagship products of the Gharb region.
In addition, a visit was made to a packaging station, during which ONSSA issued health approval in application of the provisions of Law No. 28-07 on the Health Safety of Food Products and recalled the importance of the operation of granting approvals and authorizations. 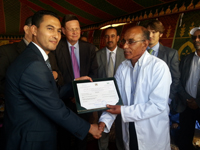 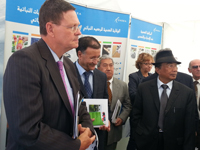 Inauguration of the Laayoune Regional Analysis and Research Laboratory 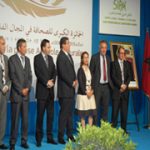