Moroccan-Russian sanitary and phytosanitary cooperation: Visit of a Moroccan delegation to Moscow

Within the framework of Moroccan-Russian sanitary and phytosanitary cooperation, a Moroccan delegation composed of officials from ONSSA and the Autonomous Establishment for Control and Coordination of Exports (EACCE) visited Moscow on May 26, 2014 or she held a meeting with officials of the Russian Federal Service for Veterinary and Phytosanitary Surveillance (SFSVP).

During this meeting, the two parties discussed phytosanitary issues related to Moroccan exports to Russia (mainly citrus fruits); to this end, the Moroccan delegation presented to Russian officials recent advances in phytosanitary control; in particular an action plan put in place to strengthen the fight against the Mediterranean fruit fly, an endemic pest in Morocco. Russian officials welcomed the various commitments made and expressed their readiness to provide Russian expertise for the implementation of this ambitious plan, which is part of the Green Morocco Plan strategy.
Furthermore, concerning the export of fishery products from Morocco to Russia, the Moroccan delegation asked Russian officials to activate the approval of some fifty establishments of fishery products and by-products which wish to export to Russia; it confirmed, in this regard, its invitation to Russian veterinary officials to go to Morocco before the end of 2014 for the approval of the selected units.

Moroccan and Russian officials thus confirmed their willingness to work together and underlined on this occasion the importance of the economic and trade relations that bind the Kingdom of Morocco and the Russian Federation and the need to strengthen this strategic partnership. 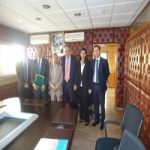 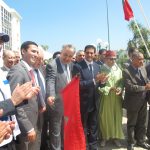