The National Codex Alimentarius Committee (CNC) held its 20th session on Thursday, December 26, 2013 at the headquarters of the National Food Safety Office.
Under the chairmanship of the Director General of ONSSA, Mr Ahmed BENTOUHAMI, this session was attended by 37 members representing ministerial departments, the profession and consumer protection associations.

Following the presentation of the assessment of Morocco’s participation in Codex work for the year 2012 – 2013 and the constraints and difficulties related to the functioning of the CNC. A debate took place and during which the representatives of several structures expressed themselves on a certain number of points; notably:
– Reflect on proposals for financial assistance to improve work at the CNC level (e.g. carry out specific studies or scientific or other research to strengthen national positions);

–         Capitalize data for certain studies and scientific data that the Scientific Research department can make available to the CNC.

The 20th session was closed by the Director General of ONSSA after reading the recommendations adopted by the National Codex Alimentarius Committee, namely: 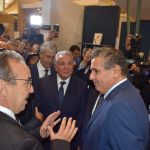